A Better Time Clock
For Your Business

Spectrum TimeClock
Can Do What You Need It To

Spectrum TimeClock is a flexible and powerful employee time and attendance system that runs from the cloud.

Spectrum TimeClock is extremely reliable. The vast majority of the application's more than 300,000 lines of code were written using the our ParaCoder® Parametric/A.I. code generator. We've use ParaCoder to write more than a million lines of code for dozens of large systems.

Spectrum TimeClock Works Overtime For You.

Calculating overtime can be simple, but it can also be quite complicated. Spectrum TimeClock does the hard work for you.

California Overtime Rules
Spectrum TimeClock also supports the complicated overtime regulations that some States have. For example, in California, employees earn overtime after working 8 hours in a workday at their regular rate of pay, and they earn double-time after working 12 hours in a workday. And, then, employees working 7 days straight in a workweek start at overtime on that 7th day as soon as they punch in.

Further complicating the matter, the 40 hour US Federal overtime regulation still applies there, but there is no pyramiding of overtime, where hours counted incorrectly against different overtime limits.

An example of that might be where a California employee works 9 hours on the first day of a workweek, and then additional hours for a total of 41 hours in the workweek. California's 8 hour overtime rule would kick in on that first day, and the employee would get an hour of overtime for their 9th hour worked, but not another for their 41st hour worked in the workweek.

If the calculations incorrectly allowed pyramiding of overtime, then both the 9th and 41st hour worked in the workweek would be overtime hours.

Spectrum TimeClock Gets The Job Done.

With Spectrum TimeClock, it is easy to do Job Costing. You can assign Pay Rate / Job Codes that employees can use to punch in for different tasks. You can then run detailed reports on how much time was spent on those tasks. If the tasks have different hourly earnings rates, Spectrum TimeClock will calculate earnings using the required weighted averaging for those hours.

Our Pay Rate / Job Codes support allows you to also setup paid breaks of maximum duration. If an employee gets a half hour paid lunch, and they take an hour, when they punch out of the paid lunch, their time can be automatically adjusted back to the paid half hour. You can view detailed data to see the actual punch times.

Spectrum TimeClock is the Right System.

Name and define authorized internet IP addresses that your employees can punch from. Punches then track the IN punch location, and the OUT punch location.

If your firm doesn't have static IP addresses at its locations, a second security mechanism that limits punching to only authorized web browsers.

If you setup "Employee Groups" and define which employees are in which groups, you can then give your managers "Group Administrator" access to specific groups of employees. They can then add and edit the time clock punches of only their own subordinates.

Administrators can view, add, edit, and delete punch data, and configure the system. Managers can view, add, and edit punch data for their subordinates as defined in an Employee Group tree. Basic users, can view their own data. Additional rights can add to what managers and users can do.

Our Job Scheduling module will allow you to schedule when employees can punch IN for different jobs.

See Additional Images Below
You'll love our wall mounted Spectrum TimeClock terminal. Most time clock terminals are manufactured overseas and have limited features. We designed and built our own here in the USA, to make it more powerful. It presents your employees with the same punch in/out user interface as your web based users. It has a 7 inch touchscreen monitor, and supports both Ethernet and Wifi. It costs a one time $340.00 plus shipping and sales tax in TN, and includes a small Uninterruptable Power Supply for reliability.

PC-Punch is a Windows Desktop program that allows your employees to quickly punch in and out using different Pay Rate / Job Codes, and Punch Out Reasons.

Our BioNetick Module is a Windows Desktop program that allow employees to punch in and out using a SecuGen Hamster Plus fingerprint reader.

Our AutoPunch Module is a Windows Desktop program that automatically punches employees IN with they Logon to Microsoft Windows, and OUT when they Logoff or Shutdown. 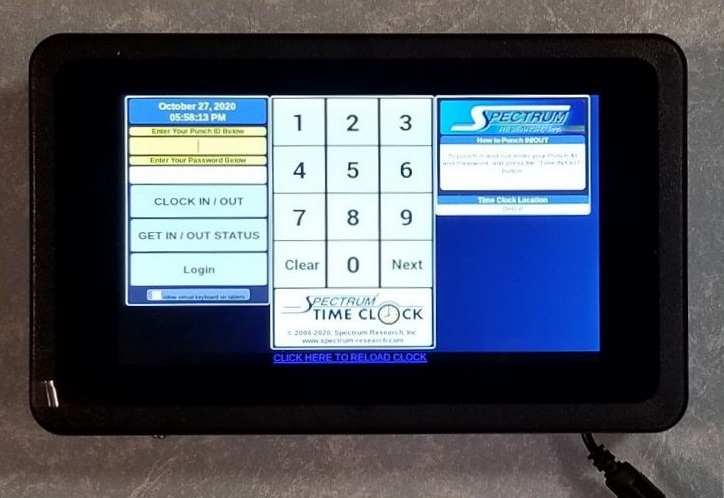 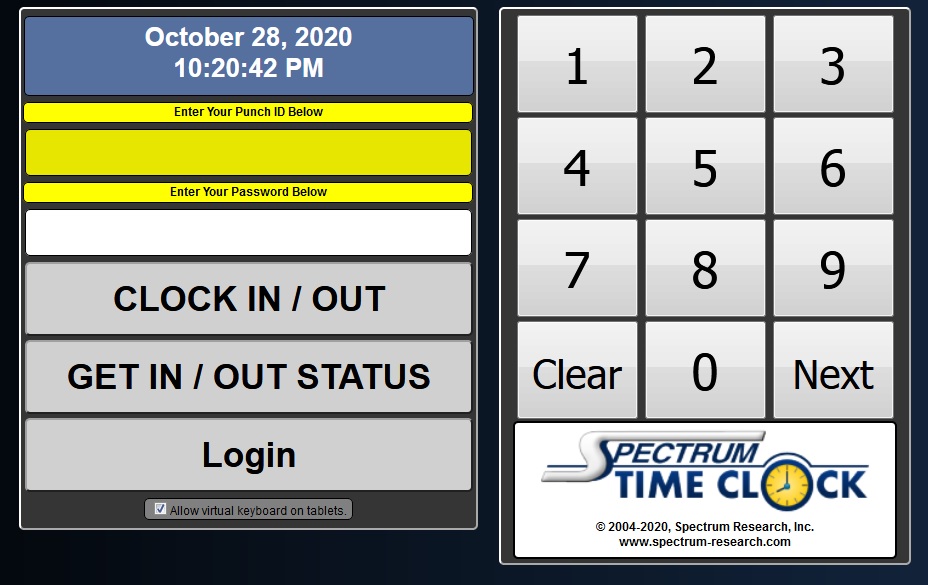 This is what the punch in/out screen looks like. We can configure it to prompt for a password too. 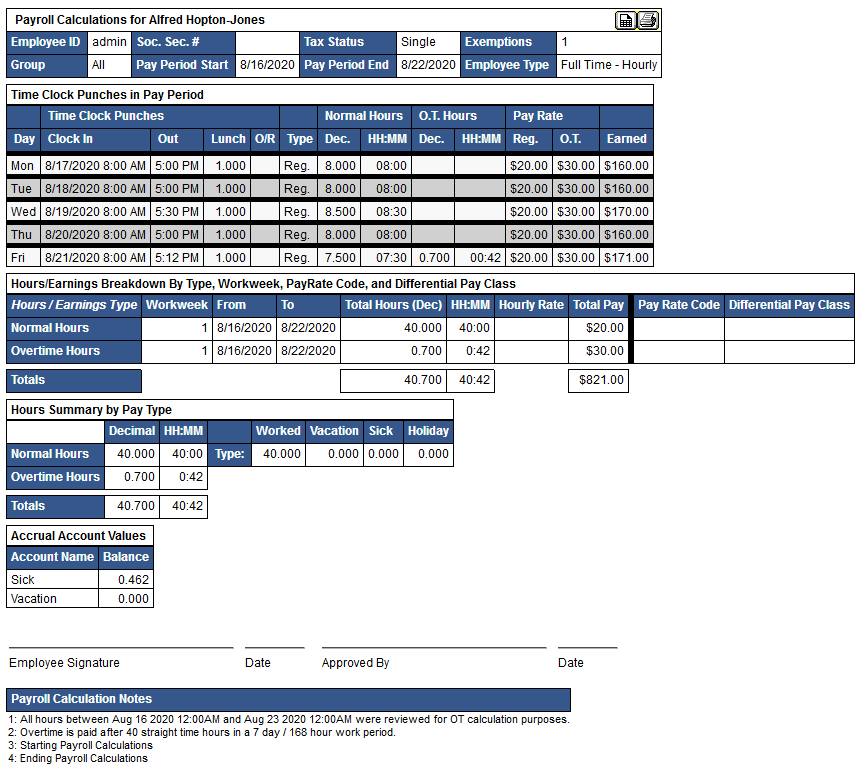 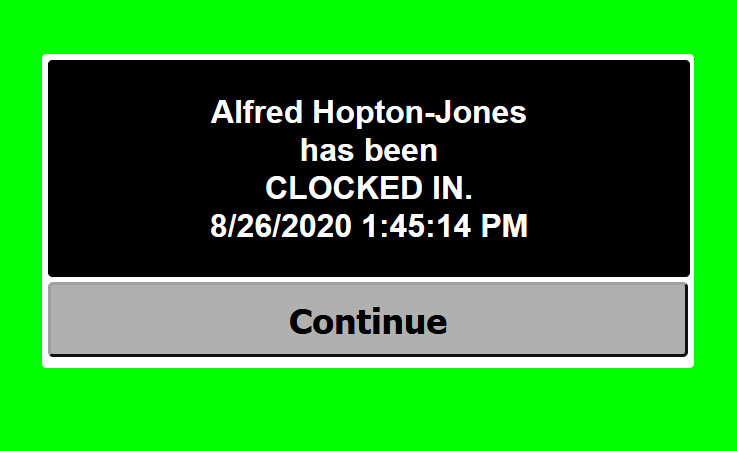 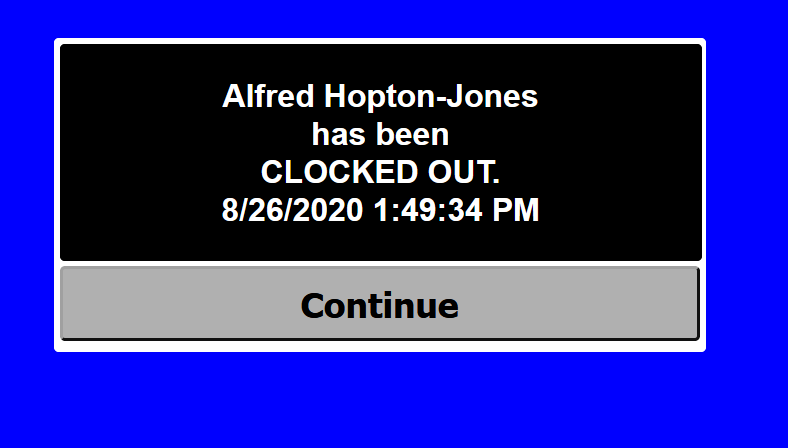 Punching In and Out, with Pay Rate/Job Codes,
and Certification of Hours at End.

* Our first tier is for 10 employees.
Tiers are in multiples of 5 employees.

Our Spectrum TimeClock client list includes these firms and organizations.

Spectrum Research was founded more than three decades ago in 1987, by Alfred Heyman, with a desire to develop architecturally elegant and reliable software solutions.

Over the years, we've developed many successful solutions including:

Send us a message now, so we can talk to you about your time clock needs, and how we can help your organization.